Almost all browser-based apps today are coded in JavaScript (or similar languages that transpile to it). So, when an architect or developer making decisions on developing new full stack web application, they need to review a sea of options such as

My recent presentation at Tech Bhubaneshwar was targeted to answer these very points, at the same time addressing ambiguities that exist around these questions.

The confusion in selecting frontend UI framework is due to many problems with JavaScript (JS) based SPA frameworks including:

Also, SPA’s are more expensive to maintain because:

Introducing Blazor:  Steve Sanderson from Microsoft team who has also created Popular JavaScript framework (e.g. Knockout JS), visualized the tremendous possibilities of WebAssembly, a binary instruction format for a stack-based virtual machine, and designed a framework to output C# code in WebAssembly. That framework is called Blazor. The official definition of Blazor: "Blazor is a free and open-source web framework that enables developers to create web apps using C# and HTML" and has come a long way from its initial experimental days.

Currently Blazor supports so many features mentioned in below Image: 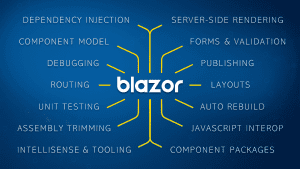 You should use Blazor Server when:

You should use Blazor Wasm when:

The Microsoft team is currently working on .NET 5 and has plans to release Blazor WebAssembly in May 2020. Steve Sanderson team is working on framework to Desktop and Native mobile applications using Blazor.