After watching the .NET Conference 2019, a three-day virtual conference organized by Microsoft, I can tell you it was an amazing conference with valuable information. The one thought that comes to my mind after this conference is "It's a Great Time to be a .Net Developer." Why? Because it's the one framework which can be used to develop any application you want or need with excellent tooling and support from Microsoft, as well as many third-party vendors like Jet Brains, Telerik, Infragistics etc.

Major announcements from the conference are as follows:

The long-awaited 3.0 version of the framework was released. .NET Core is the cross-platform development framework of Microsoft used to develop all applications ranging from desktop, web, cloud, mobile, games, IoT & AI. This is big milestone for .Net developers because:

The next version of .Net Core's web framework ASP.NET Core was released, and includes updates:

The next version of C# language was announced and  has new features to ease application development using .NET framework:

App Center is the DevOps suite of Azure services used by developers to Build, Test, and Distribute applications. Once deployed, it also helps developers monitor the status and usage of the app using real-time app diagnostics data, in addition to engaging with users via Push services. Earlier this service was limited to mobile and web applications only, in this conference, Microsoft announced support for WPF, and WinForms apps developed using .NET Core 3.0 on App Center.

As mentioned above, Blazor is a component-based sub-framework of ASP.NET Core to build SPA based full-stack web application using C#. Currently, Blazor is supported via two hosting models Blazor WebAssembly which run on the client-side browser on WebAssembly and Blazor Server where the app is executed on the server from within an ASP.NET Core app. UI updates, event handling, and JavaScript calls are handled over a SignalR connection. Because of the following features, Blazor is considered the next big thing in the .Net world:

ML.NET is a cross-platform open-source machine learning framework written in .NET Core which allows .NET developers to develop/train their own models and infuse custom machine learning into their applications using C# or F#. In.NET Conf 2019, Microsoft released a preview version of a new tool for ML.NET called "Model Builder" which takes data as input and create ML models and generates code for using those models in the .NET application.

With so many usages and benefits of .NET Core, it's not surprising that every month more than 1 million developers are joining to start .Net Core development and have contributed to .NET Core framework features with 100 thousand plus PR (Pull Requests).

To close, I reiterate It’s a Great Time to be a .Net Developer by showing the following diagram used by Microsoft that showcases the complete breadth of the .NET framework 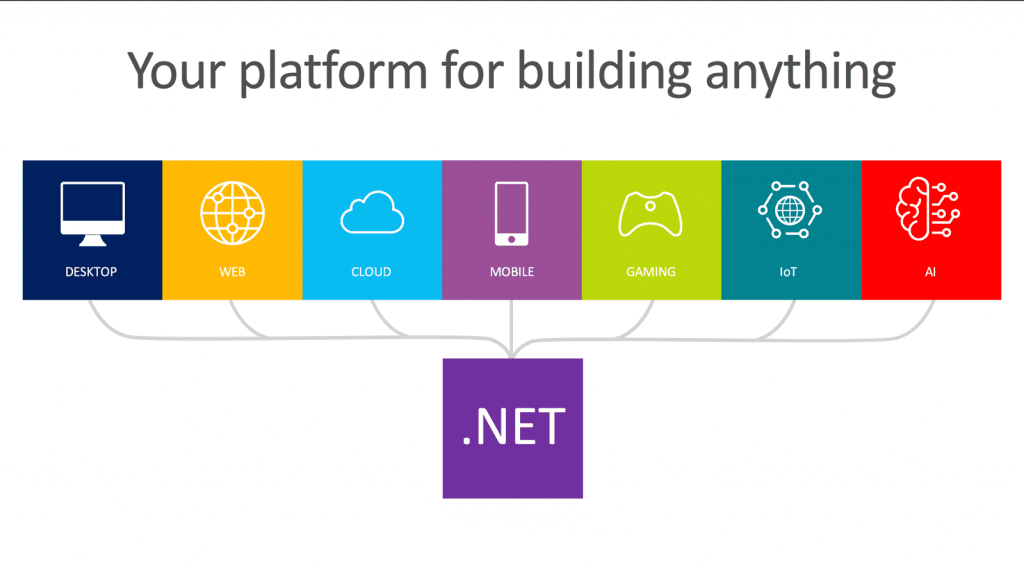 We are hosting a local .NET Conf this Saturday where we will followup the major announcements and show sample applications using the newly announced features of .NET framework.

For questions and comments, or to speak to an expert, contact us here.