There are multiple application deployment strategies that help in minimizing the impact of frequent deployments on the availability of information and on business. Each strategy has its pros and cons.  Selecting the right one is determined by the needs and constraints of IT & business.  These strategies range from Big Bang Deployment, Phased/Ramped Deployment to Blue-Green Deployment, Canary and A/B testing deployment.

The Blue-Green Deployment Strategy is a popular technique. It has two identical production environments, usually named Blue and Green. The use of identical environments is to reduce risk and downtime.  Blue-Green Deployment Strategy fully supports the continuous delivery model. Under this strategy, any work that may be ongoing on apps does not (ever) hamper the availability of the apps.  At any time, one of the environments, such as blue, is live and current. During an update, the non-live version of the environments is updated and readied (green) and tested. Once final, the green production environment is made live.

Let’s consider that we have a microservice named “notes-service” for which we need to implement the blue-green deployment.

Implementation of a blue-green deployment strategy with PCF requires the following steps:

‘Temporary route’ handles the new application version deployed in the green environment.  Once it’s running, internal testing is completed to validate its functionality before routing the live traffic to this version.

After steps 1 and 2 in the CF dashboard, navigate to the routes section, and it will provide the following routes:

This will start routing the live traffic on both blue and green environments rendering both application versions active.

Once the new version is stable and working, unmap the blue environment from the current live route to keep live requests now being served through the new application version (green).

For instance, negative testing on applications, integrated with the DevSecOps pipeline, will validate if the application behaves securely; at the same time, it receives a corrupted or vulnerable data request.  These tests would be useful to streamline the vulnerabilities management. When a vulnerability is identified in the current live (blue) environment, a patch is deployed on the green instance to resolve the vulnerability and then taken live, ensuring there is no downtime for the users.

Here is an example of blue-green deployment strategy using the Jenkins pipeline in the “notes-service” application mentioned above:

Integration test cases need to be set up to automate the deployment completely with integration testing and traffic routes switchover to combine the green and blue-green switch pipeline together.

Follow the below sample Jenkins pipeline script for blue-green switch pipeline to setup:

Deploy the green (new version) to the staging environment 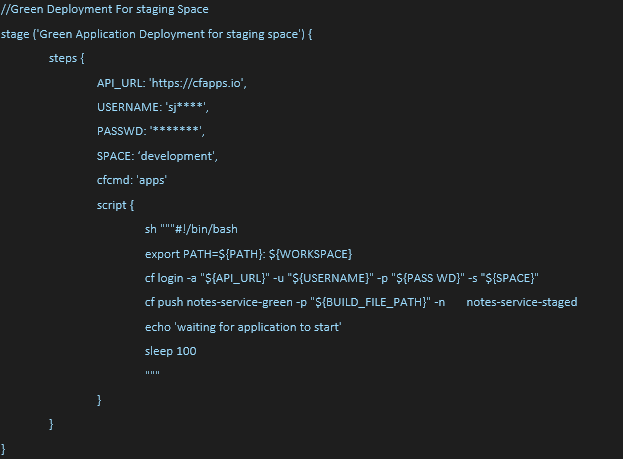 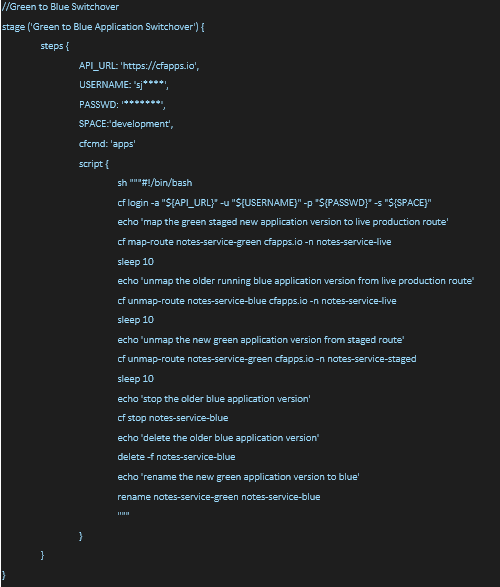 The blue-green deployment strategy is immensely beneficial, and it can play an integral role in bringing agility in application deliveries and supporting business continuity. It helps automate the deployment process with zero downtime along with the automated integration testing of a new version in a production ready environment. The one drawback, at least for some businesses, is that it increases the overall cost of infrastructure to host two identical application environments. But, the business benefits from shorter deployment cycles lead to reduced time to market, customers get product value in less time, and customer feedback reaches the product team faster which meant it can fix problems faster.

Need help in implementing your blue-green deployment strategy? Then reach out to our experts here.