An industry story featuring Eddie Chandhok, which appeared in ET Prime on 26 December 2021. Follow this link to read the original article.

Across B2B universe, blockchain technology is seeing greater adoption despite the question marks given its linkage to cryptocurrencies. Romita Majumdar charts the tech’s future and finds out why Big Tech and startups alike are logging into it.

As governments worldwide move to tether the spread of cryptocurrencies, questions about the future of the blockchain—technology platform that underpins it—are also growing more insistent amid the brouhaha surrounding the decentralised currency.

ET spoke to a cross section of industry experts, entrepreneurs and users to understand what life beyond crypto can look like for blockchain, which in actual fact began as an enabling technology for business-to-business ecosystem transactions in financial services.

For sure, blockchain’s adoption as the platform underpinning cryptocurrencies and now non-fungible tokens (NFTs) have catapulted the technology platform into the public glare, so much so that it is now widely assumed that without crypto to enliven it, blockchain will wither away. According to Venture Intelligence, the Indian startup ecosystem witnessed venture capital funding deals worth $511 million in the cryptocurrency, blockchain, NFT ecosystem in 2021 compared to $24 million last year but almost 90% of the funding went to crypto exchanges.

“People will start seeing value in blockchain only when they increasingly see it being used and endorsed by the larger B2B ecosystem across SMES and enterprises,” said Samrat Kishor, regional representative, Enterprise Ethereum Alliance.

Across the B2B universe, blockchain is powering a diverse range of services and use cases from Web 3.0 (the next phase of the internet which is much more interactive and where users have a greater control over their data) to ride sharing, land record management, inventory management, financial services as well as healthcare and identity management solutions among many others.

It’s no surprise then that everyone from top technology companies like Tata Consultancy Services (TCS) to niche startups want a piece of the blockchain pie. However, experts fear that the attempts to corral cryptocurrencies—which form a part of the larger blockchain universe—will ultimately hamper and even stall further evolution of this highly valuable ecosystem. In recent years, TCS has been working on various blockchain-based solutions for its global customers but the advent of the popular Bitcoin shifted the focus of blockchain use cases in public perception, according to Krithi Krithivasan, president of banking financial services and insurance at TCS.

Beyond the hype, there are numerous avenues to implement blockchain-based solutions, according to Krithivasan who pointed to “some components of (TCS’s) flagship banking platform solution that is available on blockchain, commanding an increasing share in the overall financial use cases.”

The software services giant offers crypto asset management solutions to global customers and is working on several blockchain applications in financial services, including insurance and loan management. Blockchain is also being used to build healthcare datasets by companies like IT infrastructure firm HPE. It uses a private blockchain to build anonymised healthcare data sets that can be used by researchers for training machine learning algorithms to identify diseases better and faster.

Why Blockchain matters
Blockchain, which is a decentralised ledger of all transactions across a peer-to-peer network, does not require a central clearing authority. This means that blockchain will guarantee the validity of a transaction by recording it on a main register as well as a distributed system of registers. All of which are connected through a secure validation algorithm. Any change in the register ensures that all stakeholders are informed to eliminate human error and a single point of failure.

To be sure, the best-known use case for blockchain, at present, is cryptocurrency—a tradable digital asset or digital form of money—that is built on decentralised technology and only exists online. It is precisely for this reason that critics argue that cryptocurrency is a threat to users who are not fully cognizant of risks involved in keeping financial assets in digital format.

In response to such widespread concerns over cryptocurrency, India listed the Cryptocurrency and Regulation of Official Digital Currency Bill, 2021 during the winter session of the parliament. The proposed bill seeks to create a framework for an official digital currency to be issued by the Reserve Bank of India, prohibiting private cryptocurrencies in India while reportedly allowing for certain exceptions to promote the underlying technology i.e., blockchain and its use cases. Although the Bill has been deferred, concerns about a potential ban of cryptocurrency in India remain.

“The Indian developer ecosystem is one of the largest in the world, it will be very unfortunate if the government was to ban cryptocurrency as that will mean that the developers won’t get the opportunity to tinker with and build on the technology of the future,” said Sijo Kuruvilla George, executive director at the Alliance of Digital India Foundation which represents the interests of the Indian startup ecosystem.

However, if the underlying blockchain technology is not under threat, future innovation on the platform will not be greatly hindered by any ban on cryptocurrencies according to industry members who point out that the venture capital ecosystem remains bullish about the slew of niche blockchain startups that are breaking new ground in India.

These include companies like ASQI, which is working on decentralised investment solutions while a second startup DRIFE has built a blockchain-based ride sharing platform to eliminate surge pricing. The basic premise of these businesses is to remove the transaction costs spent on middlemen required to interface with a central clearing authority.

Amit Singh, an executive director at Avendus Capital said that a lot of startups, which do not even feature in mainstream discussions, command sizable valuations for blockchain-based solutions across smart contracts and Web 3.0 or the next iteration of internet, as it is known.

Web 3.0 Revolution
“Web 3.0 technologies are attracting greater global interest than crypto. It removes the constraints of having proprietary databases and single points of failure. It’s but natural that Web 3.0 related solutions are garnering tremendous investment and acquisition interest, globally,” he added.

As with anything novel and new, Web 3.0 too has its share of critics. Earlier this week, technology leaders Elon Musk and Jack Dorsey had a no-holds barred spat on Twitter over the prospects of Web 3.0.

“You don’t own ‘Web 3.0’. The VCs and their LPs do. It’s ultimately a centralised entity with a different label,” said Dorsey, even as Musk questioned if the hype around Web 3.0 was just a gimmick at this point of time.

This high-decibel spat helped to raise the interest in Web 3.0—considered to be the future of the Internet and one of the biggest use cases of blockchains—by several notches.

With Web 3.0, data is envisaged to be owned by consumers and resides on blockchain networks. In contrast, centralised organisations own user data in the current version Web 2.0.

Akhilesh Tuteja, global cyber security leader of KPMG International, describes the initial version of the internet Web 1.0 as “listening to the radio” where one only consumed content, as was the case with static web pages. Then came web 2.0 where the content was user generated and interactive and would lead to the advent of social media giants like Facebook and many other platforms “Now Web 3.0 is actually a step further where people are not just interacting with the web but they are actually living in the web. I think in my view, the pandemic has also accelerated its need,” Tuteja said.

As global interest in Web 3.0 rises, industry watchers estimate that consumers will spend more time online and live more digitally. “One of the Canadian investment companies has bought virtual land worth about $2.5 million already. It’s one of the largest transactions to have happened. So, we will see a huge explosion of new use cases to be created and in the infrastructure created to support that,” said Tuteja, adding that Indian users are expected to be one of the first to lap it up as they have in areas such as NFTs.

Digital Life
Other emerging uses of blockchain include the development of Ethereum sidechains to speed up transactions as well as blockchain-enabled smart and irrefutable contracts. Sidechain is a mechanism that helps to make blockchain use cases more compatible with different algorithms. It allows digital assets from one blockchain to be securely used in another and then be moved back to the original blockchain when required.

This could also trigger the development of fully digital banks with no physical presence at all, according to KPMG’s Singh. For instance, Silicon Valley-based digital platform engineering company Infogain recently acquired a boutique app development company for its cloud and blockchain marketplace expertise.

Infogain, which has been on an acquisition spree lately, bought Phoenix-based NNT which has a large client in blockchain to add the expertise to its portfolio. “Smart contracts are important and from a financial services perspective it makes sense for platform companies like ours to have such capacity because many of our clients hail from logistics, fintech and manufacturing sectors,” said Infogain’s Head of Global Delivery, Operations and M&A Eddie Chandhok. 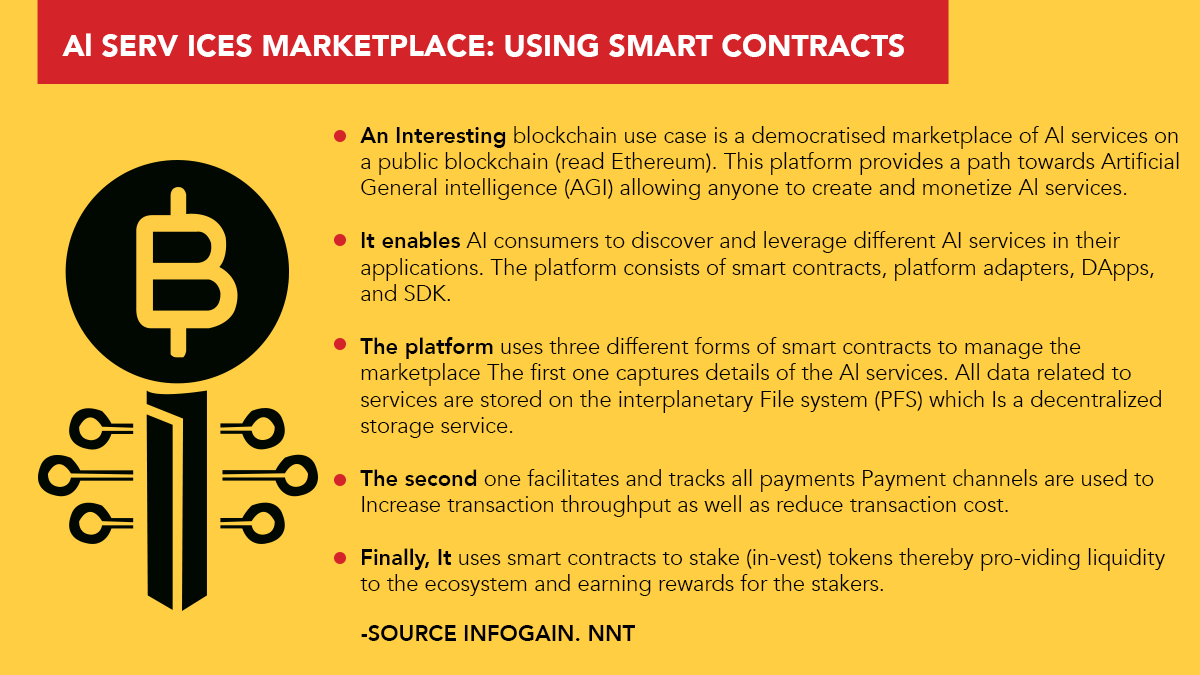 Industry stakeholders and experts contend that even as India may miss out on some cryptocurrency investment opportunities while the government maps out its own digital currency plans, the country’s blockchain innovation ecosystem has enormous scope and will continue to boom.